The purpose of the Munds Park Trail Stewards is to assist the Coconino National Forest and any government agency, as appropriate, to: 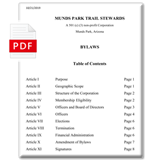 In November 2001, a U.S. Magistrate fined a frustrated citizen for illegally constructing and maintaining trails in the national forest adjacent to Munds Park. He admonished the U.S. Forest Service to take corrective actions in the Coconino National Forest surrounding the Munds Park Community. This recognition of a deteriorating forest at the Federal judicial level was the impetus for USFS and community action.

In January 2002, the USFS began meetings with Munds Park citizens at the Pinewood Fire Station. As a beginning effort to determine community needs, a local volunteer (Veronica Evaneshko, PhD) crafted a survey to gather information on current forest usage. With the help of the Munds Park Sanitary District, these surveys were sent to property owners monthly sewer bills. The USFS helped connect MUTS with Northern Arizona University, School of Forestry, who compiled the data. These USFS outreach activities resulted in the formation the Munds Park Trail Stewards (MUTS) and gave a beginning direction for the use of our &quot;hometown forest. The USFS wisely included county recreation planners and the district county representative in the early meetings. The resulting partnerships were crucial to the organization’s success. In 2002 and 2003, Coconino County provided small grants for a newsletter sent to all 3300 property owners. The newsletter not only helped broaden MUTS community support, but was instrumental in gathering donations.

A challenge for any new organization is filing the reams of both state and IRS paperwork necessary to become a tax exempt nonprofit organization. While the paperwork is often daunting, the cost is also a challenge. New board members presented MUTS information and plans to the local homeowners association (Pinewood Property Owner’s Association). They saw the value and the many benefits of the MUTS/USFS vision and provided financial support for the start-up expenses.

In 2002, the newly formed MUTS Board of Directors devised a strategy for gaining visibility and credibility in the community. While tangible accomplishments and activities were critical in building a volunteer base and community support, all had to be within the legal restrictions imposed by government regulations. Again, no trail work could occur until the NEPA study was completed and a decision rendered on the USFS Trail Plan. Thus, the early days of MUTS saw many activities that focused on the mission component “Enhance the enjoyment and safety of forest users.”

While MUTS was building a vibrant organization, the USFS was busy creating the official proposed action, “Munds Park Roads and Trails System Project.” The community was divided by motorized versus non-motorized issues. Our early survey identified user needs and MUTS monthly meetings, attended by USFS representatives and open to the Munds Park community, provided citizens’ opportunities to offer opinions on the trail system.

Prior to MUTS, the USFS had no contact point in this small, summer community. MUTS not only established an organization of volunteer workers, but a data base of concerned citizens. This enabled MUTS to contact absent property owners during the winter season to provide updates on USFS plans. The flow of information resulted in more citizens participating in the process and providing public comment on the pending decision. After much controversy, a well designed, multi-use, managed system was put in place. Off-Highway Vehicles, bikers and hikers would share many trails and a section of the forest was designated for non-motorized use only. In the winter of 2005, after three long years, the decision to implement the 22-mile trail system was finally rendered and MUTS had a strong volunteer base ready to assist the USFS! The goal to provide quality recreational experiences while maintaining and protecting forest resources was soon to become a reality.

Post note:
Diane Lawrence was MUTS first President, and along with her husband Tom and Veronica “Roni” Evaneshko volunteered many hours in making the MUTS a functioning organization.